Hands up if you are in the UK and are sick of the cold wet weather. Sigh.

It's all we talk about when the weather is bad, isn't it? Despite the depressing nature of the weather, it has amused me greatly just how many people are getting mad about the weather, as if it were controllable and no-one - especially our god awful government are doing anything about it. What do we pay them for eh?

Anyway, despite flood alerts all over our region, a months worth of rain in a day, an army of spanish killer slugs on the allotment, and no red skinny jeans in my size yesterday, I've managed to do a little bit of sewing. Oh, and the chickens have very clean feet.

My sister is moving house early next month and I wanted to make her a house warming gift. I'm aware just how long it takes me to complete a quilt, so decided on a pair of cushions to match the Joel Dewberry fabric quilt I made her earlier in the year.
I've never made cushions before, so I was well prepared for an unmitigated disaster. Firstly I chose a block - this one here in fact, from Sewn by Leila. The finished block was a good size and I guessed I would need a four inch border all the way round to make it big enough to fit the cushion pad.
The blocks were really easy to make, I've used the cheaty flying geese method before when I made this quilt with the Lida Enche fabric. Once finished, I glued the blocks to curtain lining, which I always use to line bags with when I make them - it adds stability. Rather then FMQ, I outlined the star and outer white square to keep it simple.

I used a linen blend canvas for the back, which I just overlapped to keep the construction simple and added self-cover buttons to fasten. 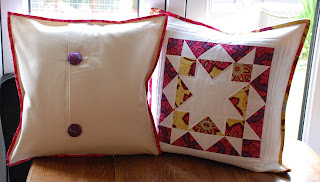 I sewed the front to the back right sides together, turned them right side out and then bound the edge just as you would a quilt. Done! I must admit that I really enjoyed a project that comes together relatively quickly. Now I'm back to the old 'which project next' seesaw!

It's raining again. It's sunday, husband is away until tonight, number one child is locked in his room with his X-box. So, I do believe this is the order of the day for number 2 child and I: 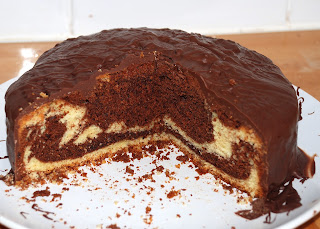 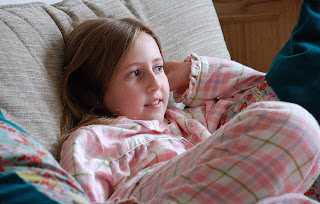